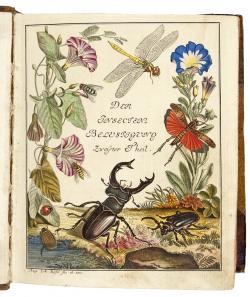 Eur 8,200 / USD 9,400
The price shown on each item does not include V.A.T (Value Added Tax). As a result of the recent EU legislation we are required to charge our EU customers the percentage of V.A.T. charged by the customer’s country of residence, unless they possess a V.A.T. registration number. Postage Additional.

A rare complete set of the most important and finest entomological German publication of the 18th century. Our copy comprises the rare supplement by Kleemann. The work was published by Roesel and his son-in-law Kleemann, both lived in Bavaria, in Nürnberg, working as artists, and both were ardent students of local natural history.
"Roesel, who studied at first with his father and then with his uncle Wilhelm, an animal painter in Merseburg, later became a pupil of the famous Preisler in Nuremberg. After living in Copenhagen from 1726 to 1728 he returned to Nuremberg for good, and there, besides painting portraits and drawings, he applied himself in particular to the study of nature. He collected insects, their eggs and larvae, studied the process of hatching, pupation, and emergence, and painted all this in a most meticulous way, as Kleemann tells us. His manuscripts, with 406 illustrations, are now in the Bayerische Staatsbibliothek in Munich. Roesel also made the engravings of his drawings and, until his death in 1757, his 'loving and diligent spouse' contributed fine colouring to the prints" (Nissen. Bestiaries). The handcoloured engraved frontispieces are of a great beauty and the plates, especially of his favourite group, butterflies and moths, usually show a complete life history, with eggs, larva, pupa and perfect insect.

The text was printed on thin paper and as in all copies, is prone to foxing. Our copy likewise has some occasional slight foxing to the text. The plates being printed on fine thick paper have no foxing and are in mint condition. A nice uniformly bound set.