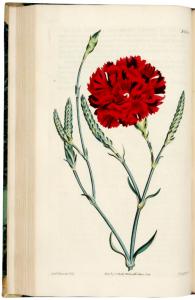 The Botanical Magazine; or, Flower-Garden displayed: in which the most ornamental foreign plants, cultivated in the open ground, the green-house, and the stove, are accurately represented in their natural colours...

the early years of this famous and beautifully illustrated magazine

An attractive uniformly bound set of the early years of this famous and beautifully illustrated magazine. The magazine has continued publication almost without interruption to the present day and has become a national institute of which Englishmen may justly be proud. It should be noted that the colouring of the earlier volumes, as offered above, is far superior to the later ones. "It is, indeed, the oldest current scientific periodical of its kind with coloured illustrations in the world, and in the beauty of production and high standard of its contributions it can claim a unique place" (Henry II, p. 302). Title pages to volumes 6 to 10 have been discarded by the binder, who got confused as there are 2 volumes, each with a title-page, bound in one. Added to the set the Index to vols. 1-53. The first 5 volumes are in a slightly later (identical) issue as the edition of the first 5 volumes was too low and quickly sold out. William Curtis (1746-1799) was a famous English botanist and is best known for his splendid 'Flora Londinensis' and 'The Botanical magazine'. The noted natural history illustrators, James Sowerby and Sydenham Edwards both found a start with the eminent magazine. The genus Curtisia is named in his honour.