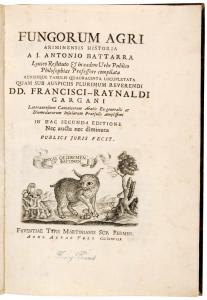 Eur 3,000 / USD 3,300
The price shown on each item does not include V.A.T (Value Added Tax). As a result of the recent EU legislation we are required to charge our EU customers the percentage of V.A.T. charged by the customer’s country of residence, unless they possess a V.A.T. registration number. Postage Additional.

Second edition of this rare and beautifully produced work describing a great variety of fungi growing around Rimini. Antonio Giovanni Battarra (1714-1789) was an Italian clergyman (of Rimini), physician and mycologist. The interesting engraved vignette on the title has the following motto (in Greek) 'We study fungi, we do not eat them'. Ainsworth considers the engravings 'excellent'. In "Zur Geschichte der Mykologie, das XVIII. Jahrhundert" by Lütjeharms pp. 145 to 147 a large comment is given of this publication. Battarra attempted to prove that mushrooms were really plants growing from spores and not just putrefying matter as was generally believed in those days. C.H. Persoon knew of the work of Battarra and even named a new genus of Fungi, Battarra, after him. The 200 figures on the 40 plates are finely engraved and give a very good impression of the mushrooms depicted. The first edition was published in 1755 and the present edition has only some minor alterations. Owner's stamp (Henry Bonnet) on lower margin of title.