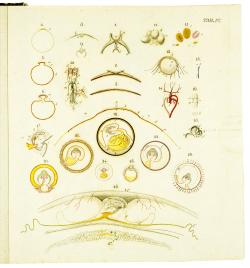 foundation treatise on the embryology of the higher animals

First edition of the 'foundation treatise on the embryology of the higher animals' (Horblit 9a). "Continuing the work of his friend and collaborator Christian Heinrich Pander (to whom the 'Über Entwicklungsgeschichte der Thiere' is dedicated), Baer observed the formation of the germ layers and established the germ layer theory. He described the way in which the layers formed various organs by tubulation, and he emphasized that the development of the embryo is from the apparently homogeneous to the obviously heterogeneous. In this he finally refuted the long held and much discussed theory that embryonic parts might be preformed in the egg. The publication of this book provided a solid basis for the further systematic study of the mammalian development" (Grolier 'Medicine' p. 215). Without the supplement to volume 2 published after Baer's death in 1888 by Ludwig Stieda. Some occasional minor foxing.

Provenance: Old stamp of Dr. Jules Barrois, Lille on titles and 2 other leaves.