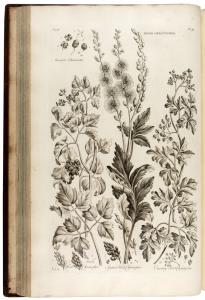 The Vegetable System. Or, the Internal Structure and the Life of Plants; their Parts, and Nourishment Explained; their Classes, Orders, Genera, and Species, ascertained, and described; in a Method altogether New: comprehending an Artificial Index and a Natural System. With figures of all plants designed and engraved by the author. The whole from nature only.

the greatest and largest botanical publication of the eighteenth century

First editions (excepting volumes 1, 4 and 5 which are in the second edition) of the greatest and largest botanical publication of the eighteenth century. The work is in complete state exceptionally rare and the present copy is one of the most complete ones to come on the market. In our catalogue 285 (2006) item 96 we offered a complete copy with 1548 engraved plates. Most sets contain a mixture of first and later issues. Our copy lacks plate 13 of volume 1; plate 50 of volume 21 (in its place is bound plate 36 which is double), and a text leaf in volume 2. A few copies of the work were also issued with the plates coloured.
A total of some 26,000 plants are illustrated and described. 'The Vegetable system is of great importance because it gave for the first time in the vernacular a comprehensive treatment of the plant kingdom, on a lavish scale... adopting the Linnaean generic names and introducing binary nomenclature' (Stafleu). Numerous species are described for the first time, most being recently introduced exotics.
The Vegetable system is dedicated to the Prince of Wales, later George III. Its publication was instigated by, and partially financed by, John Stuart, Earl of Bute, a notable patron of botany and the initiator of Kew Gardens as a botanic garden. He may well have contributed to the text. John Hill was involved in lengthy financial disputes with Bute, and the publication of the Vegetable system ended in Hill's bankruptcy and death. For a detailed history see Henrey II pp. 103-8. A very fine set.