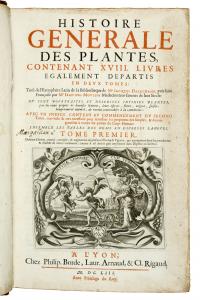 Eur 4,900 / USD 5,400
The price shown on each item does not include V.A.T (Value Added Tax). As a result of the recent EU legislation we are required to charge our EU customers the percentage of V.A.T. charged by the customer’s country of residence, unless they possess a V.A.T. registration number. Postage Additional.

The second and last French edition of Dalechamp's famous herbal. The first Latin edition was published 1586-87 followed in 1615 by the first French edition. The present edition is the most complete one in the French language. "Dalechamp is considered by some authorities to have been one of the most erudite of the French botanists of the 16th century. His book is a compilation of the botanical knowledge available at that date, and is important as it shows another grouping attemp at a classification of the plants which he described. A number of woodcuts were especially made for the book from plants sent to the author by Lobel, l'Ecluse, and others, but for the most part were taken from previously published works" (Hunt 154). Dalechamp was a student of Rondelet and among his regular correspondents were Conrad Gesner, Joseph Justus Scaliger, Robert Constantin and Jean Fernel.

First two leaves of each volumes have the outer margins somewhat browned, else a fine copy.