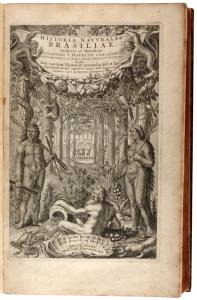 First edition and a very special copy from the famous John Roland Abbey collection in an English Royal binding of the first major survey of the natural history of Brazil and the most extensive documentation on the Brazilian flora and fauna of the 17th century. It is also a pioneering work on tropical medicine. Landis comments: "This magnificent book, the most noted work of science in seventeenth-century Holland, was a product of that century's Dutch conquest of a portion of Brazil. It remained the one great illustrated work on the natural history of Brazil until the major expeditions of the nineteenth century generated new publications". Willem Piso (1611-1678; Dutch physician) was sent by the Dutch West Indies Company as the leader of the scientific mission to Brazil, where he was accompanied by the German naturalist and traveler Georg Marcgraf (1610-1644). Marcgraf's contributions to the above work are the descriptions and woodcut illustrations of the natural history matter depicting fishes, birds, quadrupeds and serpents as well as insects, and for the larger part plants. The part on the northeastern region of Brazil and the linguistics and ethnography of its inhabitants is followed by an extensive Tupi vocabulary of the Tapuia Indians. The fine pictorial titlepage is engraved after a drawing by Matham, the original of which is in the Albertina Library in Vienna.

Provenance: The coat of arms are of James II (1633-1701), as Duke of York. This means that the arms date from before 1685, when James became King, and would have adopted slightly different arms; Armorial bookplate of John Roland Abbey and bookplate of John Henry Gurney.