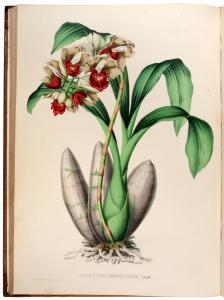 First edition of this important and attractive work. 'An orchid hunter par excellence, Linden was the first to search the mountainous regions diligently for his orchids. In so doing, he was able to obtain many new cool-temperature plants for his sponsors in Belgium. After ten years in the western hemisphere, Linden returned to Brussels in 1845, where with his son, Lucien, he founded Horticulture Internationale, the first major commercial competitor of the British orchid house Messrs. Sander. The book is named in honour of M. Pescatore of St. Cloud, France, one of the earliest orchid hobbyists on the continent, and whose collection was formed by Linden. The publication was discontinued upon Pescatore's death. The handcoloured lithograph plates were made by F. Detollenaere, after drawings by Maubert (fl. 1840-1860)' (The Orchid observed, n. 16). Jean Linden (1817-1898) was a native of Luxembourg, who still a youth moved to Belgium, to which country he imported more than 1100 different orchid-species. Because of his important contributions to orchid literature, Linden received a number of commendations and honours, and many orchids were named after him. A beautifully bound and very clean copy. The last 5 leaves with tiny inkstain at the outer margin.