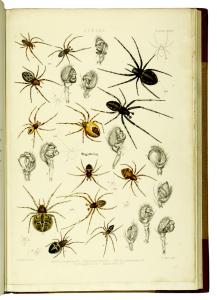 A history of the Spiders of Great Britain and Ireland.

Eur 1,300 / USD 1,500
The price shown on each item does not include V.A.T (Value Added Tax). As a result of the recent EU legislation we are required to charge our EU customers the percentage of V.A.T. charged by the customer’s country of residence, unless they possess a V.A.T. registration number. Postage Additional.

One of the most beautiful iconographies on spiders

A nicely bound copy, with some occasional foxing to plates as usual. One of the most beautiful iconographies on spiders. 'They have retained their desirability chiefly because of the excellence of their plates. There are nearly 500 coloured illustrations of 304 species of spiders, and no other book approaches this. There can be no surprise that the book has always been regarded as a really great pioneering effort, a foundation on which the whole study of British Spiders has rested.' (Savory, Spiders, Men and Scorpions p. 65).