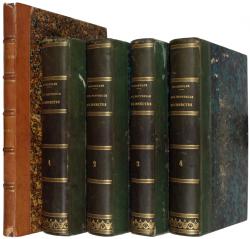 Eur 1,850 / USD 2,000
The price shown on each item does not include V.A.T (Value Added Tax). As a result of the recent EU legislation we are required to charge our EU customers the percentage of V.A.T. charged by the customer’s country of residence, unless they possess a V.A.T. registration number. Postage Additional.

The first 2 volumes were published by Walckenaer and the remaining 2 volumes jointly with Gervais. "Over a period of a decade, 1837-47, Walckenaer produced a four volume 'Histoire naturelle des Insectes Aptères', which occupies a permanent place in the history because of the large number of still-valid genera which were first described in it" (Savory, Spiders, men, and scorpions p. 54). The present copy has the plates in coloured state. The coloured issue is very rare, and the 9 plain plates were never coloured. The fine stipple-engraved plates give exact details of the depicted insects and are superbly handcoloured. The work forms a part of the series 'Suites à Buffon'.