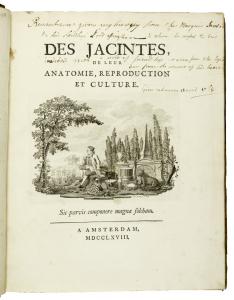 Eur 950 / USD 1,000
The price shown on each item does not include V.A.T (Value Added Tax). As a result of the recent EU legislation we are required to charge our EU customers the percentage of V.A.T. charged by the customer’s country of residence, unless they possess a V.A.T. registration number. Postage Additional.

the most important work on hyacinths published in the 18th century

First edition of the most important work on hyacinths published in the 18th century. A very interesting association copy. A presentation copy from the author to Lord Effingham 'Remembrance given very heartily from the Marquis Saint Simon to his Lordship Lord Effingham to whom he confers to be indebted with a word of friendship not alone from the ... but from the utmost of his heart. Given in bruxelles 15 avril 1768'. The 'Discours' bound at the end has the following written by Saint Simon 'by the same author & given by the same heart'.
"His 'Des Jacintes' was in its time a distinct contribution to the subject, especially Ch. 7, where 'Il entre dans un détail plus anatomique de la génération des Jacintes' (p. iv), and the 'Catalogue des Jacintes connues en 1767', which lists over two thousand named varieties, double and single, including those grown by George Voorhelm. Presumably it was also issued separately. It appears to be the most important list for the century. The analytical plates are by Jacob vander Schley (1715-1779), who had previously engraved the plates for Charles Bonnet's 'Recherches sur l'usage des feuilles...' (1754) 4to. J. van Hiltrop, engraver of the vignette, worked in Utrecht during the middle of the century" (Hunt 602). The 'Discours' bound at the end was separately published and we have never seen it bound in.
The Frenchman Marquis Maximilien-Henri de Saint-Simon (1720-99) retired about 1758 to the country near Utrecht.