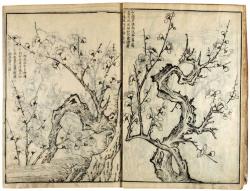 Eur 20,000 / USD 20,000
The price shown on each item does not include V.A.T (Value Added Tax). As a result of the recent EU legislation we are required to charge our EU customers the percentage of V.A.T. charged by the customer’s country of residence, unless they possess a V.A.T. registration number. Postage Additional.

The most beautifully illustrated Chinese book of the Ming Dynasty (1368-1644). Eight unrelated volumes have been published by different authors and artists within a period of a few years (1620-1628). The order of the publication of the volumes is subject to controversy. Each volume has a different title. The eight works are known as 'Hasshu Gafu', but this collective title does not appear anywhere in the volumes.

The third volume 'Mokuhon Kacho' has some considerable marginal worming at the upper margin of 7 leaves. A well preserved set, a few leaves with some occasional insignificant wormholes.