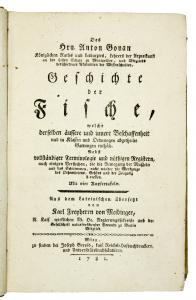 Eur 900 / USD 950
The price shown on each item does not include V.A.T (Value Added Tax). As a result of the recent EU legislation we are required to charge our EU customers the percentage of V.A.T. charged by the customer’s country of residence, unless they possess a V.A.T. registration number. Postage Additional.

Antoine Gouan (1733-1821) was a famous French naturalist. He became the doyen of Linnaean taxonomy in France and was the first to introduce binary nomenclature in the country. Gouan was primarily a botanist. He however published one important work on fishes of which the first edition with text both in Latin and French was published in 1770. The present German edition is rare and was translated by Meidinger, a famous ichthyologist. "The modifications introduced into the class by Linné in the tenth edition of the Systema naturae are adapted. The genera were quite well described, and three new ones still retained in the system (Lepadogaster, Lepidopus, and Trachypterus) were established" (Gill, T.N., Smith. Miscell. Collect., 1872).