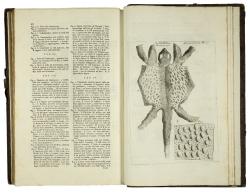 In comparison with contemporary scientific thought,Vallisnieri's work has a very modern character

First edition of Vallisnieri's collected works. It was edited by his son Antonio and contains all his famous contributions on zoology, entomology, medicine, geology and natural history. Antonio Vallisnieri (1666-1730) was a pupil of Malpighi at Bologna. "In comparison with contemporary scientific thought, Vallisnieri's work has a very modern character - as Redi had already done - the way opened by Galileo (whom he quotes only twice) and Francis Bacon (whom he also quotes) he rejected Scholastic knowledge and trusted solely in direct observation and in experiment... Vallisnieri was thus one of the first modern naturalist to have a clear awareness of the character of scientific phenomena" (DSB). Vallisinieri did a.o. extensive research on the reproductive system of men and animals, he complemented to Redi's demonstration of the fallacy of the hypothesis of spontaneous generation and was a forerunner of evolutionary concepts. Small paper repair to title-pages.