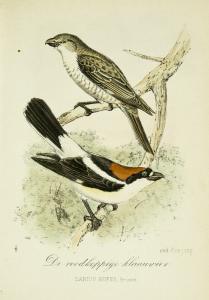 beautifully produced work on the avi-fauna of the Netherlands

A fine copy of this beautifully produced work on the avi-fauna of the Netherlands, illustrated by the author. "A general work on the birds of Holland, with short descriptions, synonymy and an account of the distribution of each species... The figures are well-drawn and pleasing. The work was originally issued in 45 parts from 1854 to 1858 under the title 'Fauna van Nederlands vogels', by H. S. Schlegel and J.H. Herklots, being intended as part of a comprehensive work on the fauna of the country. The plan was discontinued before more than the birds were treated, and the original publisher, Trap, sold the entire edition to van Goor who issued it (according to Carus and Engelmann) in 1859 with a new title-page (as above) and with a preface by Schlegel dated December 24, 1858" (Zimmer p. 555). According to a letter of Mr. Trap in the possession of the Leyden Natural History Museum the birds were drawn by Schlegel, the landscapes however by G. J. Bos, an artist from Leyden. Hermann Schlegel was director of the Leyden Natural History Museum and famous ornithologist. He published some 163 publications of which about two thirds concern birds.

Provenance: Jorge Casares with his armorial bookplate; Jan Allex de Roos with his bookplate and the signature of J.G. Verdoorn.