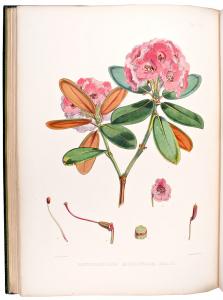 Eur 18,000 / USD 19,800
The price shown on each item does not include V.A.T (Value Added Tax). As a result of the recent EU legislation we are required to charge our EU customers the percentage of V.A.T. charged by the customer’s country of residence, unless they possess a V.A.T. registration number. Postage Additional.

One of the most attractive botanical books of the nineteenth century. "An important work, both for the botanist and horticulturist since it contains descriptions and plates of many of the best garden Rhododendron species which can be grown in this country and an account of their discovery" (Great Flower Books). The text was edited by Sir William Hooker (1785-1865) from his son's field notes sent back from India. "The drawings, based on Hooker's dried specimens and field sketches, were by Kew's official botanical artist, Walter Hood Fitch. Fitch's vigorous, confident lines and bold colouring miraculously recreated exotic bloom - 29 had been delineated by the time the last plate appeared in 1851 - which excited the botanist and were to provide the gardener with some of our best garden species" (Desmond, The European discovery of the Indian flora p. 144). Joseph Dalton Hooker obtained through Lord Carlisle a grant to explore the central and eastern Himalayas.

Second issue of part 1 only, no difference with the first edition except for the indication 'second edition'. This second isssue of the first part was printed in the same year as the first issue.