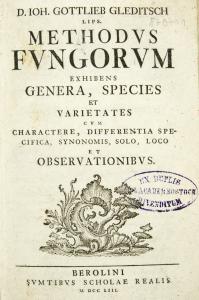 Eur 1,400 / USD 1,400
The price shown on each item does not include V.A.T (Value Added Tax). As a result of the recent EU legislation we are required to charge our EU customers the percentage of V.A.T. charged by the customer’s country of residence, unless they possess a V.A.T. registration number. Postage Additional.

notable as being the first book exclusively devoted to fungi

"The mycological reputation of Johann Gottlieb Gleditsch (director of the botanic garden of the Academy of Sciences, Berlin, and lecturer in the medical school) mainly rests on his 'Methodus fungorum' published in 1753, the same year of the 'Species Plantarum' (of Linnaeus) and notable as being the first book exclusively devoted to fungi. Although based on ten of the genera recognised by Linnaeus, their grouping shows an advance on that of earlier and contemporary authors" (Ainsworth. Introduction to the history of mycology, pp. 252-254). Old stamp on title.

Provenance: Signature of Römer, Swiss botanist on inside frontcover.