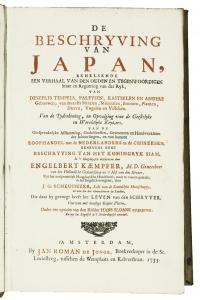 Eur 9,000 / USD 9,200
The price shown on each item does not include V.A.T (Value Added Tax). As a result of the recent EU legislation we are required to charge our EU customers the percentage of V.A.T. charged by the customer’s country of residence, unless they possess a V.A.T. registration number. Postage Additional.

Second Dutch edition of this great classic on Japan and the chief source of western knowledge on this country. Engelbert Kaempfer (1651-1716) was a German physician in the service of the Dutch East India Company. "He remained in Nagasaki from September 1690 to October 1692 and twice accompanied the chief of the factory at Deshima on his embassy to Edo (now Tokyo). In Nagasaki he made a profound study of Japanese history, geography, customs, and flora... it contains an account of his journey, a history and description of Japan and its fauna, a description of Nagasaki and Deshima; a report on two embassies to Edo with a description of the cities which were visited on the way; and six appendixes, on tea, Japanese paper, acupuncture, moxa, ambergris, and Japan's seclusion policy" (DSB). In November 1692 he left Japan for Java and Europe, and in October 1693 he landed at Amsterdam. Receiving the degree of M.D. at Leiden, he settled down in his native city, becoming also physician to the count of Lippe. He died at Lemgo on the 2nd of November 1716. The present work was first written in German but the English translation appeared first in print. A very fine copy.