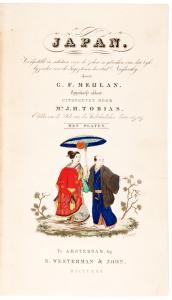 First and only edition. "Germain Felix Meijlan (1785-1831) entered the Dutch East India Company in 1806. From 1827 to 1830 he was the head of the company's factory in Nagasaki. It was during his period of office on Dejima that there occurred the notorious 'Siebold affair,' which called for the utmost discretion on his part in order to affect an amicable solution. Meanwhile he had begun to devote himself to a survey of Japanese foreign trade, the results of this study appearing posthumously in his 'Geschiedkundig oversigt van den handel der Europezen op Japan' (1833). It appears that he was contemplating a sequel to the present volume, this to center around impressions gained during his visit to Edo in 1830, but his untimely death thwarted any such plans.
The present work was completed in the spring of 1829 and is concerned chiefly with the author's observations of life and conditions in Nagasaki. It is divided into fifteen chapters treating of such diverse topics as the government of the town of Nagasaki and that of Japan as a whole, the island of Dejima, Japanese religion and festivals and including a short sketch of the Japanese language" (Nipponalia, XVI).