First and only edition of the rarest botanical iconography of Brazilian plants. Our copy lacks volume 3 with 168 plates, complete copies have 11 vols with 1640 plates. The publishing history of the present work is probably the most bizarre one in the history of botany. José Vellozo was born in Minas Geraes in 1742 and lived in Rio de Janeiro. Encouraged by the Viceroy, Luiz de Vasconcelos, he devoted 25 years to studying and collecting Brazilian plants. In 1790 he travelled to Lisbon with the intention of submitting for publication his 'Flora', containing descriptions of 1640 species accompanied by 1700 drawings, made by Friar Francisco Solano and Antonio Alvares. In 1792 the Portuguese government approved publication and the drawings were sent to Venice to be engraved. 554 plates had been engraved in Venice when the French invaded Portugal. The Portuguese government fled to Brazil and Vellozo returned to his monastery in Rio de Janeiro, where he died in 1811, leaving his manuscripts to the Royal Library. There they were rediscovered by Friar Antonio de Arrábida and Emperor Pedro I commissioned the work to be published. The plates were sent to the famous lithographers Senefelder in Paris. Emperor Pedro I commissioned an edition of 3000 copies of the above work, an edition which was very much criticized by F.J. Knecht, the successor of Senefelder, and various Parisian scientists as being excessively high. However the Brazilian government persisted. When printing was nearly ready the Brazilian government cancelled the printing order, due to political circumstances which led to the abdication of Emperor Pedro I. The work was however finished by Knecht and sent to Brazil, filling the cellars of a government department. The Brazilian government never paid the full printing costs and only very few copies were distributed. Some sources indicate that only 40 copies were distributed and the plates were finally sold to a paper factory. The present copy has the rare 'Index methodicus iconum', however lacks pp. 1-4 of the 'Table alphabétique'. A printing history of the work by the publisher precedes the 'Index', of which Junk made a reprint in 1929. Of the text which was to be printed in Rio de Janeiro only a small volume appeared in 1829; the complete text was not published until 1881. Provenance: Name of P. Olivier on foot of spines. Stafleu and Cowan 16000; Nissen BBI 2046; Barba de Moraes p 902; Brasilien-Bibliothek der Robert Bosch GMBH 379. 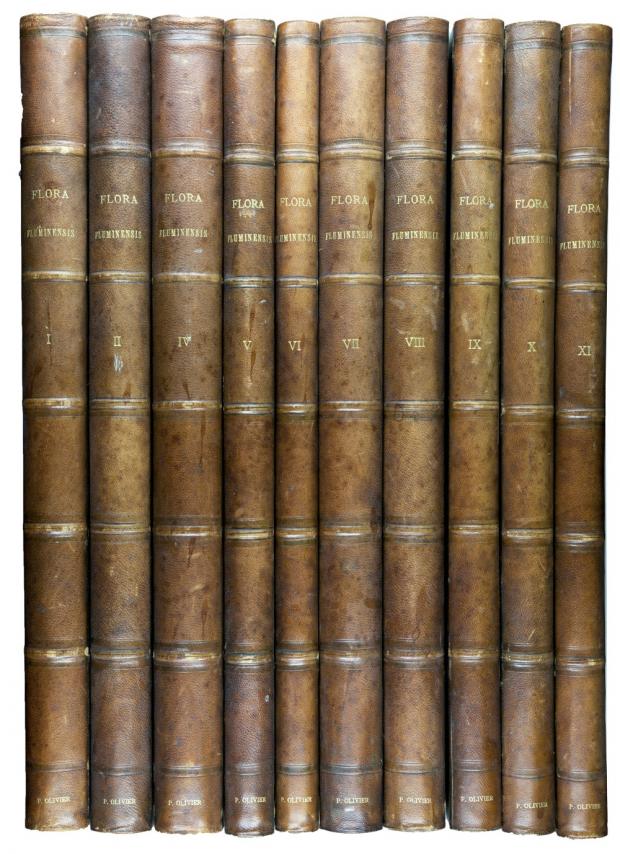