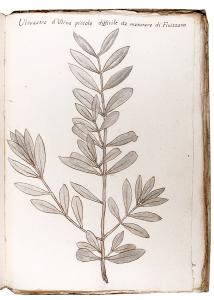 [Manuscript on Olive Trees and Olive Oil of Tuscany and some adjacent areas, by Count Luigi Fantoni].

Eur 38,000 / USD 41,800
The price shown on each item does not include V.A.T (Value Added Tax). As a result of the recent EU legislation we are required to charge our EU customers the percentage of V.A.T. charged by the customer’s country of residence, unless they possess a V.A.T. registration number. Postage Additional.

[Of the different species of Olive trees that can be found on the mounts of Agnano, in the territory of Pisa, belonging to H(er) R(oyal) H(ighness) etc., with observations also on the species of Olive trees of Lucca, Pietrasante, Montignoso, Massa, Sarzana, Lunigiana and of the two Rivieras of Genoa, with the aim of finding out which are the Species that can be used for the production of the 'olio fino' and which are those that correspond to the Species of the Ancients].

[Florence/ Fivizzano], 1770-1784. Folio (385 x 270mm). Leaves 126, including some blanks and 107 mostly full page drawings, in pen and ink, a few in pencel only, and some in grey wash or watercolour, a few plates are numbered but not bound in consecutively. Contemporary or near contemporary boards, spine with ink inscription 'Dell'Ulivi e dell'Olio, Agricoltura Cte Luigi', and a fragment of letter addressed to Conte Luigi Fantoni, in Florence pasted in on verso of frontcover, as well as a later added competition regarding the description of olive trees and olive oil of Tuscany, sponsored by the Accademia dei Georgofili in 1803 and a loosely inserted one dated 1802.

This manuscript serves as priceless testimony to the growing interest paid, above all in Tuscany, to olive growing and the study of olive oil production techniques throughout the eighteenth century. It was during this time that efforts grew to better understand the history of the olive tree and its multitudinous varieties, as well as the ways in which it was propagated, cared for and fertilized.
Around the year 1704 the botanist Pier Antonio Micheli had already begun to dabble in the study of olive trees, drafting a series of observations compiled in manuscript (E. Baldini and S. Ragazzini, Le varietà di ulico dell'agro fiorentino. Manoscritto inedito di Pietro Antonio Micheli, Florence: Accademia dei Georgofili, 1988).
The moment in which interest in the cultivation of olive trees reached its height can be traced back to 1753, the year in which the Accademia dei Georgofili was founded in Florence. Numerous handwritten memoirs and manuscripts concerning the olive tree have been kept in their archives or published in the academy's periodical. It was the very same Accademia dei Georgofili to publicly announce a competition on August 29th, 1787 to determine the best "creation of one or more olive nurseries with at least 200 trees". The prize was given to Pietro Fanechi, a worker at the Tolomei farm in Scarperia, a small town in the area of Mugello.
Outside of the confines of Tuscany, an important work to mention is the book published by Giovanni Presta at the royal press of Naples, the result of ten years of research. (Degli ulivi delle ulive, e della maniera di cavar l'olio o si riguardi di primo scopo la massima possibile perfezione, o si riguardi la massima possibile qualità del medesimo. Naples: Stamperia Reale, 1794.)

Returning to the manuscript at hand the spine of the binding reads 'Dell'Ulivi e dell'Olio, Agricoltura. Cte Luigi' and a fragment of a letter addressed to Count Luigi Fantoni is found on the verso of the front cover and seems to confirm the true identity of the author as that of Count Luigi Fantoni.
It is likely that the manuscript was ab antiquo a sort of rough draft on which Fantoni marked his observations and added information regarding each species after it had been analyzed.
Of note is the presence of three different headings on the first sheet of the manuscript, almost as if Fantoni had modified the parameters of his research in the course of his work and was thus compelled to change the title, which would also explain why the first title is crossed out. Nonetheless, the wording that most accurately describes the contents of the volume is certainly that of the third title (see English translation above). This last title states that the text analyzes the olive trees in the same geographic zones as those mentioned in the second title, with the exception of Modena, which is mentioned only in the second title. There is, however, a considerable difference between these last two titles. In the third title Fantoni sets out to describe the cultivar able to "produce fine oil", but above all to analyze the species that have already been identified by ancient authors, such as Pliny, Theophrastus, Columella and Vergil to whom Fantoni makes frequent reference.

Almost all the drawings take up the entire surface area of each sheet. All of the illustrations, in pen and ink or occasionally first sketched in pencil and then passed over with ink, are accompanied by captions written in ink. Dates mentioned in the manuscript range from 1770-1784. Within the manuscript there are also a few watercolor and grey wash plates that denote a greater morphological precision in the representation of the specimens.
In most cases the plates represent a life-sized olive branch with leaves and fruit. Even if they are drawn schematically with an almost non-existent shadowing, these drawings, with the elegant execution of the branches, the arrangement of the leaves and the meticulous portrayal of the various morphologies of the olives, remain to this day a predominately accurate guide to the identification of the specimen represented.
The manuscript is brought to a close with a series of 14 watercolor or grey wash plates that depict with extraordinary precision some of the parasitic insects that attack the olive tree. The elegant framing of the various drawings, not to mention the scrupulous calligraphy, are most probably by another hand.
In the manuscript the olive trees considered appear to be ordered mostly according to their place of origin. With the exception of a tree grown in a private garden, or more precisely "in the courtyard of Casa Cicci in Pisa", the olive trees represented all come from rural areas. Of particular importance are the few areas near Pisa famous for their olive oil production: Agnano, Asciano and Calci, all places in which the Fantoni family had agricultural holdings. The remaining drawings represent trees examined in the countryside of the provinces of Lucca, Massa and Carrara. Outside of the confines of the Grand Duchy of Tuscany a few varieties are examined in the area of Lunigiana, in particular in Castelnuovo Magra, a small town near Sarzana, and in Fivizzano, the town in which Luigi Fantoni resided before moving to Florence. Fantoni also mentions that he executed some of the drawings based on studies carried out along the Genovese Riviera.
The description of the olive trees is unfailingly concise, usually specifying the variety of the tree, its size, the exact place in which it was studied, and in a few cases the name of the farm owner. Sometimes there is even an adjective used to describe the quality of the oil and the dimensions of the leaves (narrow, average, curly) and the fruit (fleshy, small, large), an example of which is the definition of the "Ulivo Trillo", described as having "an average foliage and a small fruit." Fantoni continues: "it is a very large tree" that "is found along the path that leads to the Monastery."
To illustrate this more clearly we give some translations of plate captions:
Plate 6: "Wild olive tree with an oval fruit and narrow foliage. It is found in the area above San Saverio in a stone pit near the Monastery road" (This refers to a place neighboring the Carthusian monastery of Calci, founded around the mid 14th century). Plate 9: "Large leafed olive tree, fleshy, strong, and deep green. It makes a fruit with a raspy guise. It is found along the road that leads up to the Ponente monastery. When ripe its juice is blood-red. It remains below the Trilloni, an isolated tree, full of mites." Plate 5: "Cucca olive tree with a smaller, wild and rounded fruit. It is found amongst the scrub above the Giannetti hollow in the Asciano plain."
An element that is completely overlooked, however, is the pit, even though the taxonomical relevance of the olive pit was already recognized by Tournefourt at the beginning of the eighteenth century.
The historical uncertainties related to an identification of the various olive species based exclusively on a handful of morphological characteristics does not always make for an easy comparison between the varieties indicated in the manuscript and the modern taxonomy of olive trees. The recurrence, however, of many names of olive trees still cultivated today does seem to confirm the substantial continuity over time that characterizes the olive's germoplasma.
The manuscript therefore constitutes an important documentation for the history of olive cultivation as well as a fundamental record for the reconstruction of a classification of the varieties of olive trees cultivated throughout the eighteenth century.

The firstborn of four sons, one of whom was the celebrated Giovanni known by the name of Labindo, Luigi Fantoni was born from the marriage of Count Ludovico A. Fantoni and Anna de Silva. Luigi Fantoni was educated at the Nazzareno College in Rome where he was recognized for his studies in science and literary arts. He composed poetry in Latin and Italian and, for particular official occassions, composed celebratory inscriptions.
Luigi Fantoni had a passionate interest in agronomy, a discipline which he proved to deeply understand, dedicating himself to the development and improvement of agricultural practices in his vast holdings.
Fantoni also collected a notable number of documents to better delineate the history of the Lunigiana area. These records were used in part to write Le Effemeridi....di Aronte Lunese (his pseudonym), a kind of compendium of the Lunigiana history written in the form of a lunar calendar.
Lauded by contemporary critics (cf. Novelle letterarie pubblicate in Firenze l'anno 1779, pp. 228-229; and C. Zofanelli, La Lunigiana e le Alpi Apuane, Studi di C. Z., Florence: Barbera, 1870, pp. 67-69), the volume provides a complete panoramic view on the natural environment of the Lunigiana area, from its origins to his own time, covering subjects from the economy to politics, commerce and agriculture. Among the species described are grape vines and chestnut trees, and with particular attention, olive trees (pp. 94-95).
The work, which is enriched with illustrations, was reprinted in the volume Aronte Lunese illustrato da Michele Angeli di Mazzola, dottore in medicina, in 16°, Pisa: tipografia Prosperi, 1835, pp. 7-207.
On the 8th of May 1776 Luigi Fantoni was elected correspondent member of the R. Accademia dei Georgofili in Florence, but in the offices of the Florentine institution there remain no traces of his work.
From his marriage to the Florentine Maddalena Morelli Adimari, Luigi Fantoni had four children, the most accomplished of which was Agostino, who collected and published the works and memoirs of his uncle Giovanni ("Memorie istoriche sulla vita Giovanni cognominato Labindo", Poesie di Giovanni Fantoni fra gli Arcadi Labindi, Florence: Guglielmo Piatti, 1823, vol. 3, pp. 223-316.)
Luigi Fantoni died on June 8th, 1808 in Noletta, where he is buried.