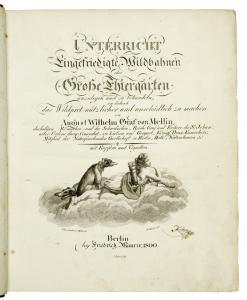 "The first edition of a treatise on the installation of deer parks and enclosures for the preservation of game" (Schwerdt II, p. 22).
Graf August Wilhelm von Mellin (1746-1836) came from a famous and wealthy Prussian nobel family. After his studies in Halle he returned to his large estate Damizow near Stettin where he enjoyed extensive hunting. He added a zoological garden and a pheasantry to the estate and stood in lively correspondance with the great naturalists of his time such as Buffon, Burgsdorf, Schreber, Bloch, Bechstein and others. He was member of the 'Naturforschenden Gesellschaft' of Berlin and Halle. In 1770 he was appointed chamberlain to the court.
In 1779 Mellin published 'Versuch einer Anweisung zur Anlegung... der Wildbahnen' of which the original manuscript was sold at auction (Sotheby's 7 may 2003).