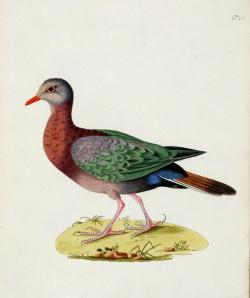 Eur 4,500 / USD 4,700
The price shown on each item does not include V.A.T (Value Added Tax). As a result of the recent EU legislation we are required to charge our EU customers the percentage of V.A.T. charged by the customer’s country of residence, unless they possess a V.A.T. registration number. Postage Additional.

An important work as it gives early descriptions of birds from the West Indies and the northern parts of South America. Emperor Franz Stephan, husband of Maria Theresia, founded the Imperial Zoological Gardens at the Schönbrunn Palace in 1752. In 1755 he sent an expedition to the West Indies and the northern parts of South America to collect plants and animals for the gardens at Schönbrunn and the menagerie. Nicolaus Joseph Jacquin was in charge of the expedition which lasted 4 years. During this trip he made notes on birds which were published by his son Joseph Franz Jacquin. 32 species are treated of which 25 come from the above mentioned regions. According to the descriptions in the book almost all the birds had been kept at the Schönbrunn menagerie. "Several new species are described. The plates are excellent for the period" (Zimmer I, 320). Only 2 plates are signed by the artist, one plate by A. Amon and one plate by J. Adam.