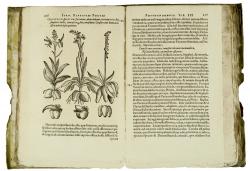 a walnut looked like the human brain, so would cure head ailments

Second edition of this work on signatures in plants which was originally published in Naples in 1588. "It is sometimes held that della Porta was the real originator of the botanical Doctrine of Signatures in any approximation to a scientific form. The theory was that Divine Providence had formed plants in such a way as to indicate the ailments they would cure (e.g. a walnut looked like the human brain, so would cure head ailments). Protagonists of this theory quarrelled violently with those who believed in astrological medicine ..." (Hunt). The elaborate woodcut title shows a.o. a lynx, emblem of the Accademia Lincei, of which Porta was a member. Galileo and Colonna were fellow associates in that society. "The book has a genuine scientific merit as well, for it groups plants ecologically by locale and distribution" (Anderson p. 198). The woodcuts are of a very high quality and rare praised as such by Arber. "The illustrations of the 'Phytognomonica' are helpful in interpreting Porta's view. The part of man's body which is healed by a particular herb, or the animal whose bites or stings can be cured by it, are represented in the same woodcut as the herb. For example, the back view of a human head with a thick crop of hair is introduced into the block with the maidenhair - a capacity for curing baldness being suggested by the hair-like delicacy of the leaf-stalks of the fern... A scorpion completes a picture of plants with articulated seed vessels; a shoot of heliotrope is also included, since, to Porta's vivid imagination its curved flower spike recalled a scorpion's tail" (Arber, Herbals pp. 251-2). Some slight browning.