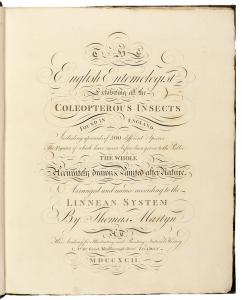 The English Entomologist, exhibiting all the Coleopterous Insects found in England; including upwards of 500 different Species, the Figures which have never before been givento the Public.

One of the most attractive early English colour-plate books on Coleoptera. "This contains a number of plates of beetles, some very splendid; they were produced by Martyn's academy for drawing and printing natural history" (Knight, Natural History Books in English 1600-1900 p. 93). "...to the illustration of all those beautiful and curious species of insects found in England, of which the greater part are either non-descripts, or their figures hitherto unpublished; and lastly, and principally, to the founding an Academy of painters of Natural History, working on principles which give a transparency, with richness of colours, and a facility of execution, that are entirely new ..." (from the Introduction). The fine plates were drawn by Martyn and engraved and coloured by his 'Academy' of young men who he had trained as natural history artists. A fine copy.