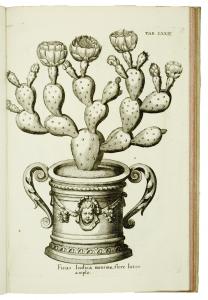 Eur 29,000 / USD 30,500
The price shown on each item does not include V.A.T (Value Added Tax). As a result of the recent EU legislation we are required to charge our EU customers the percentage of V.A.T. charged by the customer’s country of residence, unless they possess a V.A.T. registration number. Postage Additional.

A well preserved and spotless copy of one of the most beautiful German florilegia illustrating numerous exotic and unusual plants. It is the last edition of de Bry's famous florilegium.
The first edition appeared 1612-14 with 87 plates. The florilegium was very popular and considerably expanded in later editions. Johann Theodor de Bry belonged to a noted family of engravers from Frankfurt. "In 1641, twenty-one years after the death of Johann Theodor de Bry, Matthaeus Merian the elder published an amplified version of the 'opus magnus' of his father-in-law 'Florelegium novum', entitling it 'Florilegium renovatum'. Merian was born in Basel in 1593... he settled in Frankfurt, where he married de Bry's daughter. A versatile artist, Merian not only continued the work of his father-in-law as an engraver, he also painted landscapes, portraits and historical scenes. His children, Matthaeus the younger and Maria Sibylla, followed in his footsteps: both became artists." (Tomasi, An Oak Spring Flora p. 74).

This last edition has 115 plates portraying the most beautiful plants of the 'Florilegium Renovatum et Auctum' published in 1641 (-1647).