A very fine copy of one of the most attractive early works on coleoptera, the complete atlas volumes however lacking the last 5 text volumes. First and only edition of this superbly illustrated work on exotic and European coleoptera. Carl Gustav Jablonsky was private secretary to the Queen of Prussia. After Jablonsky's untimely death Herbst edited the work from volume 2 on. A great number of the plates were drawn by Jablonsky. The work should be considered a first attempt to a total survey of the coleoptera. A sequel was published to the above work dealing with butterflies. "The Frenchmen were however preceded in their illustrated compilation of the Cook voyage entomology by Johann Herbst in Berlin, whose illustrated monographs on beetles (Natursystem der Käfer) were published between 1783 and 1795. Although he may have visited London, it is more likely that Herbst saw duplicates given to Fabricius by Banks and taken by the former to Kiel, which is relatively more accessible from Berlin. His illustrations of New Zealand insects are the earliest published" (Andrews, The Southern Ark p. 45). Andrews quotes the wrong dates of publication. All plates have brilliant colouring. One atlas volume has small repair at ends of spine and the paper of the boards of the atlas volumes has been replaced. Provenance: Bookplate of Reinold Charpentier. Nissen ZBI, 2078; Junk, Rara I, 10. 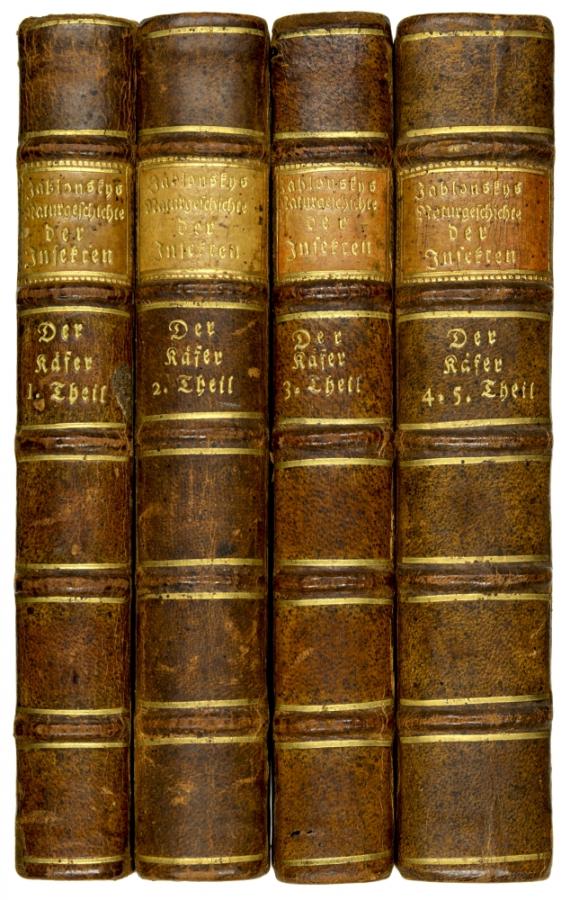