A fine uniformly bound set of this rare iconographie on fruit with superb large plates, of which the first 6 volumes depict pears, volume VII peaches, volume VIII peaches (remaining part), prunes and apricots, and the last volume strawberries and currants. The colour-printed engraved illustrations are signed: A. Riocreux del. & Mlle. E. Taillant sc., and the chromolithographed ones: A. Riocreux del., G. Severyns, chromolit. Brux. & Mlle. E. Taillant sc. "The most sensitive and skilful French botanical artist of the period was Alfred Riocreux (1820-1912), who may be considered the Paris counterpart of Walter Hood Fitch ... Trained by his father, the boy progressed so rapidly with drawing and painting that the sketches which he made at the age of thirteen were considered worth preserving at Sèvres. The botanist Adolphe Théodore Brongniart (1801-76), whose father had also been employed at Sèvres, directed the attention of the young Riocreux to botany and was probably also responsible for bringing him to the Muséum d'Histoire Naturelle. Here the young artist met Joseph Decaisne (1807-82), for whose superb 'Le Jardin Fruitier du Muséum' ... he made the drawings ..." (Blunt, pp. 229-230). G. Severyns, being responsible for the excellent chromolithographs in the above work, was the most gifted and most prominent lithographer of Belgium in the 19th century, who started his firm already in 1829 and remained the leading printing-establishment for nearly a whole century. Some occasional foxing but mostly to the tissue guards. Nissen BBI, 456; not listed by Dunthorne and Pritzel. 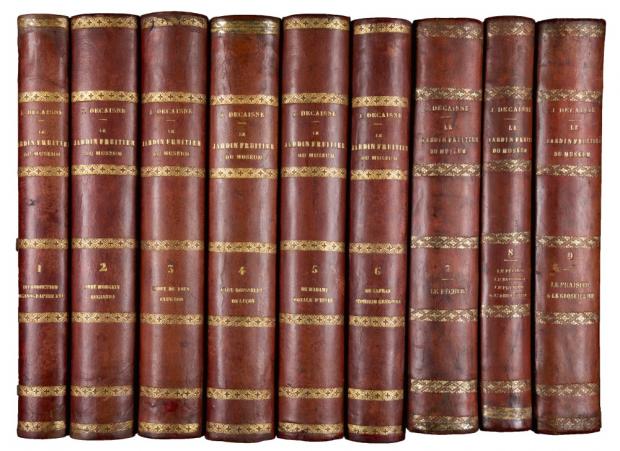