First and only edition of this magnificent publication depicting for the first time on a large scale the ethnography and geography of Japan. The present copy has 29 plates and 227 text pages in the Ernst Wasmuth Verlag reprint of 1930 and has one plate not called for in the collation made by Bernard Quaritch in 1869, however lacks the frontispiece to the first volume as well as the 'Schilling-Cannstadt Denkmahl' plate. The following text is lacking: Abtheilung I one leaf 'Inhalt des ersten Heftes'; Abtheilung V pp. 45-186; Abtheilung VI pages 65-72; Abtheilung VII pp. 165-328. Not included in the total count of 365 plates are 19 appendix plates of Japanese text (1 plate in Abtheilung 5 and 18 numbered plates in Abtheilung 7), 25 numbered plates of Japanese text Wa Nen Kei "Annales Japonici" as well as 2 unnumbered plates belonging to this section and the lithographed title (Abtheilung 3). All these plates are listed in the Quaritch collation in the section plates 'Stein-tafeln' and for this reason there seems to be some confusion about the total number of plates. A few copies were issued on large paper, our copy is the normal issue. The work remained unfinished and 7 parts were published dealing with the following subjects: Mathematical and physical geography of Japan, hydrographical and geological maps, views and tables; People and state, a description of the inhabitants of Japan, their manners and customs, government and administration, with illustrations; Contributions to the history of Japan: mythology, history, archaeology, numismatics, with chronological maps, illustrations and tables; Arts and sciences, in particular the Japanese language and literature, with excerpts from original texts and illustrations; Religion: description of the deities, deified rulers, temples and monasteries, priests, monks and nuns, religious monuments, utensils and dress in Shintoism and Buddhism; Agriculture, industry and commerce with descriptions of related natural products and illustrations of commercial crops, animals, machines and implements; Neighbouring countries of Japan: Ezo with the Southern Kurile Islands, Korea and the Ryukyu Islands. Von Siebold was the most important European scientist who almost single handedly put Japanese studies on the European academic map. In 1823 he was posted to Japan as a surgeon to the Dutch factory on Deshima. He played a significant role in introducing Japan to the West and in his introduction of Western science to Japan. For the illustrations of the present work use was made of Siebold's large ethnographical collection, some 4700 items, which was opened to the public in 1831 and bought by the Dutch government in 1837. The Dutch were the only western nation to trade with Japan from 1639 until the opening of Japan by Perry. Von Siebold (1796-1866) was a German surgeon in service of the Dutch East India Company. 'Despite the restrictions imposed on the freedom of movement of the inhabitants, Siebold found life on the settlement quite comfortable... Since the late eighteenth century, when it had become easier to import and read books in Dutch, groups of scholars had started to engage themselves in the study of Western medicine. Dutch became the medium for these 'Dutch Studies', Rangaku. The main activities of these scholars, 'Rangakusha', were centered around the capital Edo, but all over the country was a growing interest in Western sciences during Siebold's time on Deshima... Soon, Siebold started teaching on a regular basis, mainly on the subjects of the natural sciences and medicine. In return, his students taught him Japanese and a little written Chinese. In addition, his students helped him with his botanical research... Siebold had secured the help of the Japanese painter Kawahara Keiga (1786-1865?) to make visual records of landscapes, buildings and other things which were physically impossible to collect" (K. Vos, 'Assignment Japan, Von Siebold pioneer and collector', pp. 10-13). During Siebold's stay in Edo he met the court astronomer Takahashi Sakuzaemon, the famous geographer Mogami Tokunai and Mamiya Rinzo, who provided Siebold with important information, maps etc. Siebold was expelled from Japan in the autumn of 1829 because maps were considered by the authorities as secret. Siebold had managed already to ship his collection to Batavia. However some of his Japanese friends were imprisoned. Cordier 477-48; Assignment Japan, Von Siebold pioneer and collector pp. 22-25; Nipponalia 1135; Alt-Japan Katalog 1396. 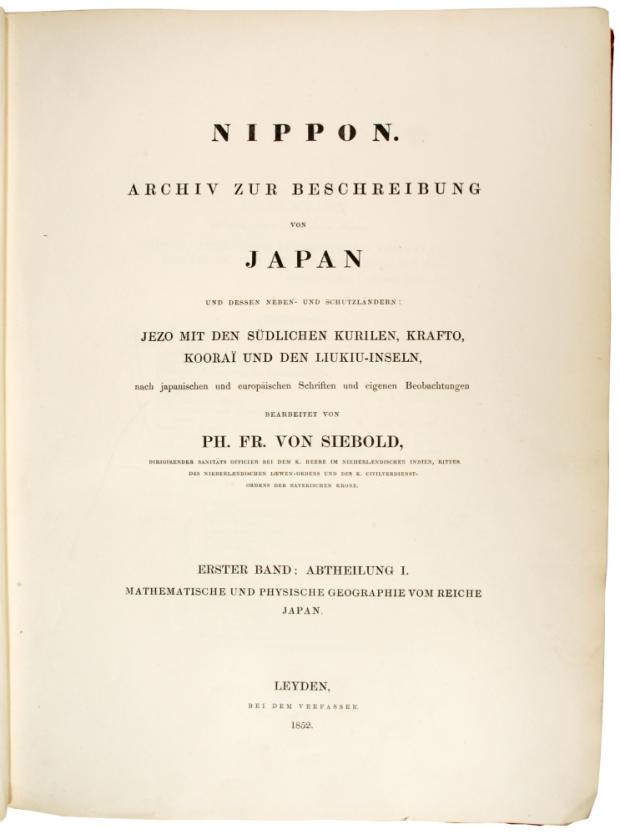