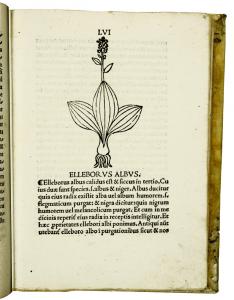 Venice, Joannes Rubeus and Bernardinus Vercellensis, March 15 1509. 4to (210 x 150 mm), ff. (4), 150, (18, including terminal blank), with 150 woodcuts in the text; lower margin of title renewed at an early date, not affecting text, first gathering and final blank strengthened at inner margin, some early annotations, a very good copy in eighteenth-century Italian vellum, a little worming to spine.

The Italian woodcuts are based on the German 'Herbarius' cuts but all are newly designed, being finer in execution

This is the third edition of the 'Herbarius Latinus' printed in Venice, and the fourth printed in Italy. With two exceptions, these are the blocks cut for the 1491 Vicenza edition, which were transferred to Venice and used by Simone Bevilacqua for his 1499 edition; two of the blocks are copies of the originals, with one reversed. The blocks were used again for the 1502 Giunta edition, which the above is a page-for-page reprint of. The preface attributes the work to Arnoldus de Villanova, as does the 1502 edition, which was copying an error in the text of the 1499.
Despite the fact that the 'Herbarius' originated in Germany, it 'sold as well in Italy, as it did in Germany, if not better. There its second section may have contributed to its success, for it was concerned with materials of medicine that were commonly available in the shops of apothecaries and spice merchants... The second section has 96 chapters, though many of them are very brief. They deal with the following: laxatives; aromatics, fruits, seed, and plants of garden and orchard; gums and resins; salts; minerals and stones; and a variety of animals and their products, such as goose-grease, cheese, honey, and ivory''(Anderson, An illustrated history of the herbals p. 86). The Italian woodcuts are based on the German 'Herbarius' cuts 'but all are newly designed, being finer in execution and the lines more delicate, and for the greater part quite different' (Klebs). Nissen considered them more delicate and Arber 'more ambitious... and, on the whole... more naturalistic' (Herbals p. 192).