A fine copy of noble provenance of the most attractive fruit book ever produced. This work represents the apogee of French stipple-engraved colour printing, achieved by Redouté and his pupils. The plates first appeared accompanying Antoine Poiteau and Pierre Jean François Turpin's edition of Duhamel du Monceau's 'Traité des Arbres fruitiers', published in 72 parts, 1807-1835. After Turpin's death in 1840 Poiteau, who was the sole author of the text, took control of the plates and removed Turpin's name from them. He also arranged text and plates according to the group of fruit, whereas the 1807-1835 edition was without systematic arrangement. "Von A. Poiteau wurde die neue Auflage dieses pomologischen Werkes bearbeitet mit dem Titel 'Pomologie Française', Paris 1836-1846, der eine sehr beachtenswerte Einleitung vorangeht" (S. Martini, Geschichte der Pomologie in Europa p. 92). "This work is a re-issue, with greatly modified text, of the 1807-35 edition of Duhamel du Monceau's 'Traité des arbres fruitiers'" (RHS Lindley Library). The first volume is devoted to almonds, peaches, apricots, and plums; the second to citrus fruit, grapes, cherries, strawberries, raspberries, etc; the third to gooseberries, currants and pears (over 100 varieties); and the fourth to apples, hazelnuts, walnuts, figs, and even an avocado. Poiteau and Turpin were both outstanding botanical artists in the 'Redouté' style, and utilised the techniques of colour-printing Redouté had devised. The 'Pomologie française' was published by Langlois, the great master of colour printing who supervised much of Redouté's best work. A team of over twenty engravers worked on the plates. 4 manuscript leaves in Swedish bound in before title of first volume mentioning the name of Gustav Trolle-Bonde at end. A superb copy without any foxing. Provenance: Bookplate of the Säfstaholms Bibliothek with the initials GTB (Gustaf Trolle-Bonde) at head of bookplate and on all spines. Gustaf Trolle-Bonde (1773-1855) was a patron of the arts and collector of books and paintings. He inherited Säfstaholms in 1797 and rebuilt and redesigned large parts of the estate to house his growing art collection and library. The library was sold in 1920. The estate is now an art museum showcasing Swedish artists from the early 20th century. Nissen BBI, 551; Great Flower Books p. 55; Stafleu & Cowan 1548; Raphael, An Oak Spring Pomona n. 31. 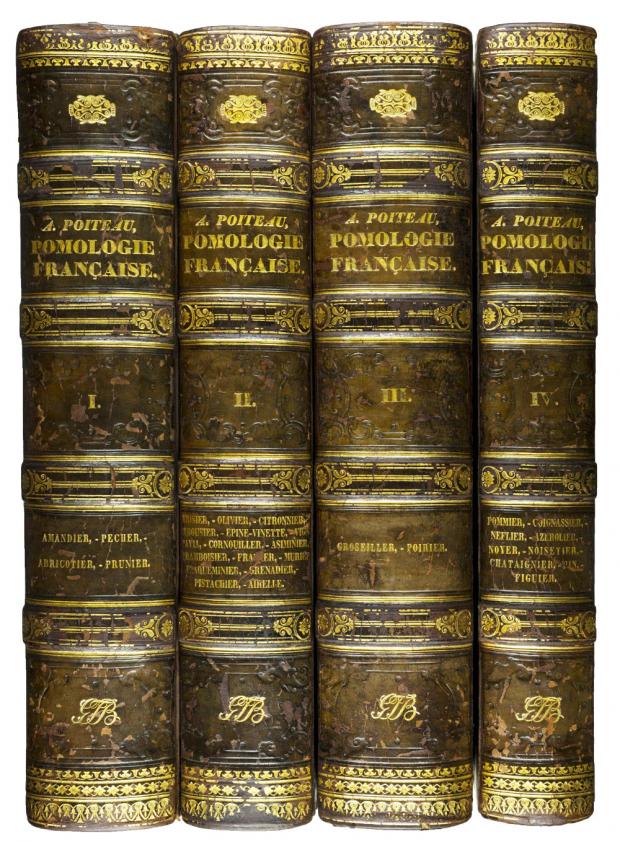