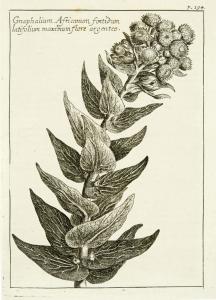 Eur 1,500 / USD 1,500
The price shown on each item does not include V.A.T (Value Added Tax). As a result of the recent EU legislation we are required to charge our EU customers the percentage of V.A.T. charged by the customer’s country of residence, unless they possess a V.A.T. registration number. Postage Additional.

Nissen BBI, 2079. "At the turn of the century Johann Georg Volckamer (1662-1744), a wealthy merchant of Nuremberg with a fine garden, produced his 'Flora Noribergensis', Nuremberg 1700, with 25 illustrations 16 of which depict Cape plants; among them is probably the first illustration of the large and difficult genus, Hermannia" (Gunn & Codd. Botanical exploration of Southern Africa, p. 62). The second edition of this rare local flora of Nurenberg, including many plants from America, Africa and the Orient. J.G. Volckamer was according to Ferchl the son of J.C. Volckamer, the author of "Nürnbergische Hesperides". Father and son established the famous botanical garden in their home town. Some slight browning.