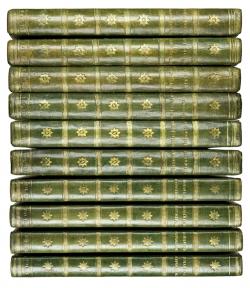 The Botanist's Repository, comprising colour'd engravings of new and rare plants only, with botanical descriptions in Latin and English after the Linnaean system...

Eur 28,000 / USD 28,000
The price shown on each item does not include V.A.T (Value Added Tax). As a result of the recent EU legislation we are required to charge our EU customers the percentage of V.A.T. charged by the customer’s country of residence, unless they possess a V.A.T. registration number. Postage Additional.

London, printed by T. Bensley and published by the author, 1797 (-1815). 10 volumes. 4to (265 x 210mm), with 10 engraved titles and 664 (many folded or double-page) hand-coloured engraved plates. Contemporary green morocco, sides with gilt coat of arms of the Earl of Darnley and gilt borders, gilt ornamented spines with gilt lettering, gilt edges.

A spendidly bound set of the first edition of this showcase of exotic species, which made a contribution of lasting importance to the literature of botany and horticulture by providing records and means of identification of a great diversity of beautiful and interesting plants, many of them new to science (Hunt catalogue). A large number of the plants depicted and described are from Australia and South Africa (among the latter 47 proteas and 26 ixias). The text was written by John Kennedy, Adrian Haworth and George Jackson. Each plate is accompanied by a leaf of letterpress text. The plates are all by Andrews.
Aitken and others 'Capturing Flora. 300 years of Australian botanical art' page 88, comments on plate 82 'Banksia serrata' as follows: "The specimens collected at Botany Bay by Banks and Solander in 1770 played a surprisingly modest part in describing Australian flora taxonomically but there can be no doubt that their introduction into horticulture, such as Banksia serrata, named by the son of Carl Linnaeus in 1781, epitomised the excitement of New Holland 'exoticks'". On plate 295 'Capturing Flora. 300 years of Australian botanical art' comments as follows: "Passiflora aurantia, the Norfolk Island passion-flower, was introduced to England in 1792 and first raised by Lee and Kennedy - 'as an addition to the very few handsome climbing plants fit to decorate the trellis-work of our modern greenhouses, or conservatories, this plant must be considered as a great acquisition," and on plate 400 as follows: "Lady de Clifford's plant houses at Paddington contained one of the most celebrated exotic collections in London, and the Australian Red Mahagony, Eucalyptus resinifera, was flowered in her garden in 1804, for the first time in Europe, perhaps a strange appreciation for a tree that grows in excess of 25m in height".