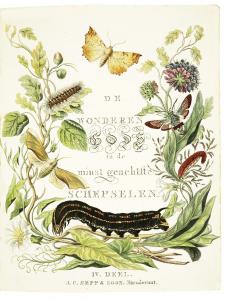 Eur 12,500 / USD 13,800
The price shown on each item does not include V.A.T (Value Added Tax). As a result of the recent EU legislation we are required to charge our EU customers the percentage of V.A.T. charged by the customer’s country of residence, unless they possess a V.A.T. registration number. Postage Additional.

One of the finest works on butterflies ever published

A fine complete set of the first series. "First series started by Christiaan Andreas Sepp together with his son Jan Christiaan (1739-1811) published in issues and in the format after the model chosen by Roesel von Rosenhof; Sepp followed his own path for the descriptions of butterflies and their illustrations. It has become the most important work on Dutch lepidoptera" (Landwehr 182). The author of the second series (1860-1900) was Snellen van Vollenhoven and of the final third series (1905-1928) Brants. Towards the end of the 7th volume the plates become lithographs.
"Christiaan Sepp assured his public that the publishing house of Sepp would not copy any other author. When he made this assurance he had in mind the successful work published in Germany by Roesel von Rosenhof which went to several editions, including a Dutch edition. The Sepp house had high standards and refused to publish any plates that they did not think were perfectly finished, employing only the best artists; the Dutch printing houses were at this time the leaders for publishing fine colour works. The plates of this book are finely engraved and perfectly coloured. The book was once described as one of the most beautiful books ever published on Lepidoptera. When starting the work, the intention was to include all insects, but it became a work on Lepidoptera only. After the death of his father in 1775, Jan Christiaan continued the work, using many descriptions from his own personal observations. He started to collect insects and embarked on many collecting expeditions. He built a very fine insect collection and was an excellent entomologist, in addition to his skills as an artist. Jan Christiaan had inherited his father's skill as an artist and engraver, but his own son Jan (1778-1853), who helped him and continued the series, although a good artist, had not the same talent" (P. Gilbert. Butterfly Collectors and Painters p. 70). The Sepp family were the publishers as well as the authors of the present work. They published some major natural history works. The here offered first series is the most attractive part of the whole work.