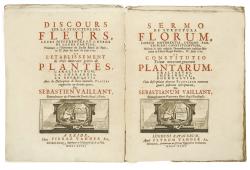 Eur 2,500 / USD 2,600
The price shown on each item does not include V.A.T (Value Added Tax). As a result of the recent EU legislation we are required to charge our EU customers the percentage of V.A.T. charged by the customer’s country of residence, unless they possess a V.A.T. registration number. Postage Additional.

First edition, second issue of a important work, on the sexual system of plants, which greatly influenced Linnaeus. The text is both in French and Latin. "Sebastien Vaillant, who had studied under Tournefort and held an appointment as botanist at the Jardin du Roi in Paris was one who was early convinced of the correctness of Camerarius's doctrine of the sexual function of flowers. At the opening of the garden at a new site in 1717 he used the occasion to give an address entitled 'Discours sur la structure des fleurs' which created something of a sensation, particularly among students. Vaillant gave an exposition of the sexual function of flowers which was rendered vivid and a little shocking by his use of vernacular terminology in comparing the stamens to the penis and testicles of animals, and by humerous reference to the innocent sexual pleasures of flowers. In spite of this, it was a serious discussion and presentation of a new theory, and played a considerable part in securing its general acceptance. In addition the work emphasized the need for a terminology of the floral parts which should correspond to the new understanding of their functions and be generally accepted by botanists. Vaillant's discussion was an important step towards such a terminology, and the adoption of the terms stamen, filament, ovary, ovule, and placentation, in their modern sence, was due to him" (Morton pp. 241-2).

"The 'Discours sur la structure des fleurs' greatly influenced Linnaeus during his student days. He knew of Vaillant's work through his teacher Rothman, but did not see the book until later. B.D. Jackon, biographer of Linnaeus notes: Herein the sexuality of plants was set forth as an indisputable fact. Linnaeus was warmly attracted by these views and therfore he began to examine flowers for stamens and pistils, soon finding that they were not less different than the petals, and were the essential parts of the flower." (Hunt). Linnaeus himself declared the following about Vaillant: 'He was a great observer, and every day I become more convinced that no one has been more skillful in establishing genera'. Pritzel gives 1718 as date of the present work, however it is evident from NUC that some copies of the first edition are dated 1717 (see Hunt). An uncut but browned copy.