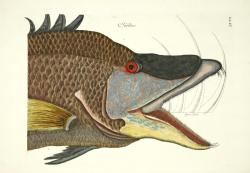 Eur 95,000 / USD 98,800
The price shown on each item does not include V.A.T (Value Added Tax). As a result of the recent EU legislation we are required to charge our EU customers the percentage of V.A.T. charged by the customer’s country of residence, unless they possess a V.A.T. registration number. Postage Additional.

"Catesby's 'Natural History' is the most famous colorplate book of American plants and animal life" (Hunt 486).

A very fine copy of the second, and much enlarged, German/ Latin edition of Catesby's masterpiece with excellent colouring of the plates. The first German edition was published in 1750 with only 72 plates. The present work describes the fishes, reptiles, insects and some other animals and plants of the New World, which were published in the second volume and the appendix of the first edition of Catesby's famous work. The first volume of Catesby's work dealt with birds and a translation in Dutch and German was published separately by Seligmann.

"Catesby's 'Natural History' is the most famous colorplate book of American plants and animal life" (Hunt 486).

"Mark Catesby, born 24 March 1682, after studying natural science in London, made two sojourns in America, 1712-19 and 1722-26? He resided in Virginia and traveled; sent back seeds; and carried back specimens that impressed Sir Hans Sloane and Dr William Sherard. The second time, he arrived in Charleston in May 1722; travelled in Carolina, Georgia, Florida, and the Bahamas, seeking materials for his projected 'Natural History'; sent back specimens. Back in London, he devoted himself to the preparation of the book. As he could not afford artists and engravers, and trusted none but himself, he studied etching under Joshua Goupy and did the work himself" (Hunt p. 143).
"Catesby described and illustrated thirty-five different kinds of amphibians and reptiles in his book. Thirty-two of these are recognized to-day as distinct species... Mark Catesby's ability to distinguish different species of animals was exemplary. He rarely illustrated or gave different names to animals that have not been recognized by later specialists to be valid species? Statistically, this is a far better record than almost every other naturalist who has worked in North America up to the present day. Catesby was indeed a gifted and careful observer of nature" (Kraig Adler. Catesby's fundamental contributions to Linnaeus's binominal catalog of North American animals, published in 'The Curious Mister Catesby').

The present copy has the supplement bound at the end with 9 plates which are included in the total plate count.
An unusually fresh copy with exquisite colouring of the plates in an attractive contemporary binding.