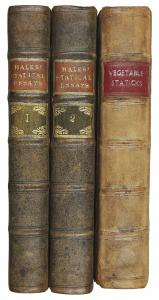 [A] Vegetable staticks: or, an account of some statical experiments on the sap in vegetables: being an Essay towards a natural history of vegetation: Also, a specimen of an attempt to analyse the air, by a great variety of chemio-statical experiments, which were read at several meetings before the Royal Society.

Eur 4,800 / USD 5,300
The price shown on each item does not include V.A.T (Value Added Tax). As a result of the recent EU legislation we are required to charge our EU customers the percentage of V.A.T. charged by the customer’s country of residence, unless they possess a V.A.T. registration number. Postage Additional.

The first complete account of the physiology of plants, including the reaction with air and movement of the sap

Provenance: Two volumes with the armorial book plate of the Library of Ragley Hall.