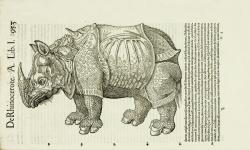 A very rare complete and fine set of the first editions of Gessner's 'Historia Animalium', including the almost always lacking posthumously published volume V on Snakes and Scorpions.
Gessner's zoological works are 'considered the basis of modern zoology'. It is the foremost purely zoological work of the Renaissance period and based on the author's extensive journeys throughout Europe as well as on his immense knowledge of previously published literature. Its influence on science of the succeeding age was considerable. In each part Gessner describes one animal after the other on the lines of Pliny, but with far greater knowledge based on his own experience and criticism.
(I:) The first part of the zoological encyclopedia concern mammals. "Gessner also provided the names of each animal in as many languages as were known or available to him, and he even proposed suitable German names for animals that had not yet been named in the vernacular. The indexes to these names are in Latin, Hebrew, Arabic and Persian..., Greek, Italian, Spanish, French, German, English and 'Illyric' (which means the Slavic languages Czech, Polish and Russian, the latter in Romanized form)" (Wellisch A 23,1). The fine woodcuts include that of God creating Eve from Adams's rib surrounded by animals in the Garden of Eden.
(II:). The second volume concerns amphibians.
(III:) The third volume on birds has name indexes in 10 languages.
(IV:) In his 'Liber IV qui est de Piscium & Aquatilium' Gessner 'discussed and illustrated many molluscs' (Dance p. 18). The work deals with fishes and other aquatic animals.
(V:) On snakes and scorpions, was published posthumously by Gessner's friends Carron and Wolf from his notes.
Many of the woodcuts were cut after paintings by Lukas Schan, some of which survived as part of the Felix Platter collection in the Basle University Library. The original drawings for many of these illustrations were recently discovered in the Amsterdam University Library. See Florike Egmond and Sachiko Kusukawa, 'Circulation of images and graphic practices in Renaissance natural history: the example of Conrad Gessner', Gesnerus 73/1 (2016), pp 29-72 and Conrad Gessners 'Thierbuch'. Die Originalzeichnungen, Darmstadt 2018.
The woodcuts contain the first naturalistic representations of the animal kingdom, and effectively herald the birth of the zoological book illustration. They are archetypes of much subsequent animal illustrations even into the 18th century.
Volume 1 contains Liber I, volume 2 Liber II & III, volume 3 Liber IV and volume 4 Liber V.
The contemporary vellum bindings with some repair. Three title-pages with old obliterated handwritten name and a few leaves with very slight damp staining.

Provenance: Bookplate of the Hirsel Library. The Hirsel was the home of the former British prime minister, Sir Alec Douglas-Home,