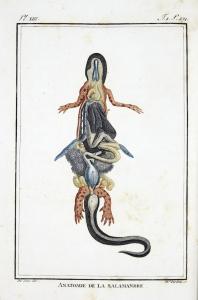 Eur 3,900 / USD 4,300
The price shown on each item does not include V.A.T (Value Added Tax). As a result of the recent EU legislation we are required to charge our EU customers the percentage of V.A.T. charged by the customer’s country of residence, unless they possess a V.A.T. registration number. Postage Additional.

The very rare coloured issue of Daudin's work. The plates are beautifully colour-printed with extensive handfinishing. "Daudin's most extensive herpetological work, and the one on which his reputation rests, was the 'Histoire Naturelle, Générale et Particulière des Reptiles' (1801-1803), in eight volumes with 100 plates ... This book, part of the so-called Sonnini edition of Buffon's encyclopedia, was the standard herpetological reference of its day ... Daudin stated that he had examined over 1100 specimens belonging to 517 species, triple the number catalogued by Count Lacepède only 25 years before, his genera are well defined ..." (Adler, Contributions to the History of Herpetolgy p. 20). "Of all the herpetological treatises to emerge in France immediately following the French Revolution, the most comprehensive was Daudin's. The great voyages of discovery of the 15th to 18th centuries had brought to Europe enormous masses of new plant and animal species... and into most of the 19th century, Paris was the center for herpetological studies" (S. Haines, Slithy Toves. Illustrated classic Herpetological books at the University of Kansas p. 72). François Marie Daudin (1774-1804) died at a very early age. An uncut copy.