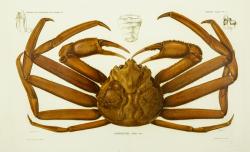 Eur 39,000 / USD 42,900
The price shown on each item does not include V.A.T (Value Added Tax). As a result of the recent EU legislation we are required to charge our EU customers the percentage of V.A.T. charged by the customer’s country of residence, unless they possess a V.A.T. registration number. Postage Additional.

the most important scientific expedition to Scandinavia

A complete set of the most important scientific expedition to Scandinavia, which is composed as follows:
Text-volumes: Relation du Voyage, by X. Marmier, 2 volumes; Météorologie, by V. Lottin, A. Bravais and others, 3 volumes; Magnétisme terrestre, by V. Lottin, A. Bravais and others, 3 volumes; Aurores boréales, by V. Lottin, A Bravais and others, 1 volume; Géologie, by E. Robert, 2 volumes (bound in 1); Géologie, by J. Durocher, 1 volume; Géographie physique, Botanique et Physiologie, by C. Martins, J. Vahl and others, 2 volumes; Astronomie et hydrographie, by V. Lottin, A. Bravais and others, 1 volume; Littérature scandinave, by X. Marmier, 1 volume; Histoire de la Scandinavie, by X. Marmier, 1 volume.
Atlases: Atlas Pittoresque, with 311 lithographed plates; Physique, with 31 plates and maps; Géologie (by Durocher), with 11 plates (on 12 sheets); Géologie (by Robert), with 20 plates; Zoologie, with 76 hand-coloured engraved plates.
The fine plates of the 'Atlas Pittoresque'' are by Mayer, Lauvergne and Giraud. Plates 1-27 concern Denmark, plates 28-36 Faroe Islands, plates 37-39 Hamburg, plates 40-127 Norway, plates 128-154 Spitzbergen, plates 155-171 Lapland, plates 172-220 Sweden, plates 221-251 Finland, plates 252-287 Russia, plates 288-310 Lithuania, Poland, etc. There is an extra plate 103A, not called for in the index of plates.
The 'Atlas de Physique' shows among other subjects, 15 splendid as well as dramatic views of the northern lights, the most dramatic is an aurora observed at Bossekol, Finnmark (northern Norway), on Jan 21, 1839. The 'Atlas de Géologie' has impressive plates of glaciers, a particularly fine one is 'Vue répresentant l'enceinte de montagnes et des glaciers qui entourne la baie de la Madeleine (Spitzbergen)'.
The 76 hand-coloured engraved plates of the Zoological Atlas are composed as follows: Birds. 6 plates (unnumbered) - Fishes. 20 plates (numbered 1, 4-9, 11-22 & 16bis) - Crustacea. 40 plates (numbered 1-11, 13-20, 22-31, 35-43 & 5a, 11b) - Vermes, Coelenterata, Protozoa. 10 plates (numbered C-M). The text to this atlas remained unpublished as well as the printed title to the atlas.

Joseph Paul Gaimard served as naturalist on four major scientific voyages. His first voyage was a circumnavigation of the globe on the 'Uranie' 1817-1820 led by de Freycinet, the second voyage was the search for La Perouse on the 'Astrolabe', 1826-29. In 1835-6 he was on board the 'Recherche' as the scientific leader to an expedition to Iceland and Greenland. And finally in 1838-40 Gaimard was the leader of a scientific expedition, see the above offered copy, on the 'Recherche' to Northern Norway, Lapland, Spitzbergen, and the Faroe Islands.
"The commission was instructed to investigate and report on all phases of science, on history, and social conditions of the northern countries mentioned in the title. The Scandinavian countries, Sweden and Norway, and the Spitsbergen archipelago were visited during the summer of 1838 and 1839, and in the summer of 1840 a trip was made to Archangel" (Arctic Bibl.). "Born and educated in the French Midi, Paul Gaimard became one of the most widely traveled naturalists in the history of scientific exploration? serving as director of the Scientific Commission for the North, he conducted extensive explorations in Lapland and on Spitzbergen and the Faroes. With the latter journey (1838-1840) Gaimard's frenetic, albeit highly productive, wandering apparently came to an end" (DSB V, p. 225).
Some occasional browning and foxing, generally a fine and complete set.